Note: I haven’t posted anything in a while, and there have been some personal reasons for it. For me, I have to be motivated to write, and for the last couple of years that kind of motivation for me has been hard to come by. But John Prine’s recent death gave me back a bit of the motivation I’ve been sorely lacking. For me, his death kind of put things in perspective … and I needed that. Bottom line is this: I’m alive and right now I’m healthy. I have my kids, I have great friends, I own my home, and I have a thriving business. I have a lot to give thanks for, and for some time now I haven’t been doing that. Beginning with this little piece below, I hope to start changing my perspective for the better. So keep coming back for more (if you want), and remember, “Life is too short to play a lousy guitar!”

I’ve been giving serious thought about what to post in the wake of Mr. John Prine‘s very untimely death due to complications from COVID-19. He was certainly one of the greatest songwriters to ever live, but unless you knew him and his music, or maybe had the honor to meet him in person, you probably wouldn’t have known that. To try and put him in perspective, Mr. Prine was the type of songwriter who could look at any individual or situation and sum it up in 15 seconds or less, dissecting everything about it with the skill and precision of a brain surgeon, throw in a little wit and humor, and then transform it all into a song that would make the hair on the back of your neck stand at attention.

Fortunately, I had the honor of briefly meeting him once, back in late 2011. Mr. Prine very unassumingly walked into my music store and made a beeline towards the most expensive guitar I had at that time – a 1957 Martin D-28. Of course, I recognized him immediately but didn’t say a word. After all, the best advice a fellow guitar-business friend ever gave me was, “Don’t act like a fan when you meet your heroes,” so, I tried to act as cool and collected as I could. But he looked like he was on a mission (I later found out someone told him to stop by and check out that guitar). Once he got to the D-28, he turned around and asked if he could play it. Now, most people usually walk straight up to the expensive guitars and try themselves to take them off the walls despite all the posted signs indicating otherwise. But not Mr. Prine. No sir. He asked to play it and I quickly grabbed that D-28 and handed it right to him, He then sat down and proceeded to fingerpick some of the most heavenly notes imaginable while I, of course, stood there mesmerized listening and trying not to “act like a fan,” which was getting harder to do with each passing second. But I kept my composure and enjoyed the mini concert Mr. Prine was allowing me the privilege of hearing. When he was done he stood up, handed it back to me and said, “That’s a nice guitar you’ve got there. I’ll have to give that one some thought.” Immediately, the salesman in me flew out the window, and I was no longer interested in selling Mr. Prine my guitar nearly as much as I was hoping to have a simple conversation with him about guitars and music. But as luck would have it, he didn’t have much time, and we exchanged a few pleasantries about my store and guitars before he had to leave. But before he left, the “fan” in me did come out a little and I said, “It sure was a pleasure to meet you Mr. Prine. I’ve been a huge fan of your music for a long time.” He sincerely thanked me, shook my hand and turned around and walked out the door. And just like that, my encounter with one of the world’s greatest songwriters came to an end. 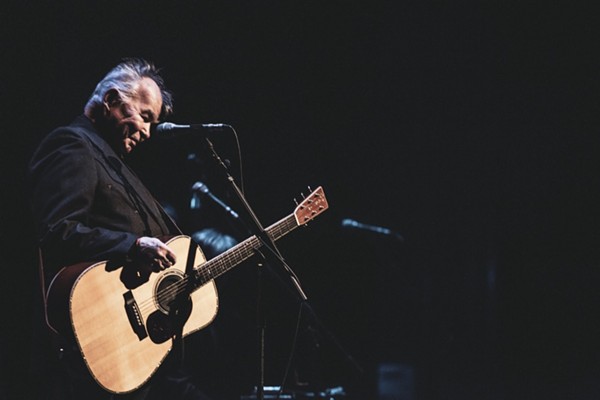 In hindsight, however, it didn’t really end there at all. Six years later Mr. Prine and I would come to have something else in common – other than a lifelong love of good guitars and great music. In late 2017 I was diagnosed with stage four squamous cell carcinoma in my left tonsil and four surrounding lymph nodes. I underwent six weeks of both chemotherapy and radiation, with its effects lasting well into 2018. It was one of the most humbling times of my life, and there were many tough moments during my treatments that I would look back on those 15-20 minutes I spent with Mr. Prine and think to myself, “Hell, he got through this and he can still sing and make great music, so if he can get through this then I can too.” And you know what? I did! I recently celebrated two years of being cancer free, and I now look back at that brief encounter as a moment in my life that was somehow meant to be. I’ll treasure it forever, and now more than ever because I’ll have to wait awhile to personally thank him for the inspiration he unknowingly gave me. So with that, I bid Mr. Prine a very bittersweet adieu. May you Rest In Peace, sir, and know that I look forward to the day we can continue our brief encounter, and get to talkin’ about good guitars and great music.

Gabriel J. Hernandez is the owner of Blues Vintage Guitars, Inc., a guitar shop in Nashville, Tennessee, specializing in the buying and selling of vintage and newer high-end guitars and gear. He is also an accomplished writer, having earned a B.S. in Journalism from The University of Florida in 1988. Over a 25-year career he has worked as an investigative journalist for several news organizations and publishing companies, as a staff sports writer for The Palm Beach Post, and most recently as the Web Editor for Gibson Guitars at the company’s worldwide headquarters in Nashville. Hernandez has played guitar since the age of six, and has been fascinated (some say obsessed) by the instrument – and music in general – ever since. You can reach him any time at 1-615-613-1389, or visit his company’s web site at http://www.bluesvintageguitars.com.